Schedule a Visit
Our Service Details

Review Us On Google!

Can’t get your home cool enough? Our licensed technicians can diagnose and repair the problem on all makes and models.

Need a brand-new air conditioning unit for your home? Let us help you make the best decision on size and efficiency.

Get protected with an extended warranty on all labour and parts and never have to worry about your AC for the entire life of the unit.

Get $25 off of any new air conditioning unit with installation

The offer is valid through the summer of 2022.

When your Air conditioner reaches the 15-year mark, you may start hearing strange noises, experience leaking and it might even emanate odd smells. These are all signs you need a new unit. Buying a new central air conditioning system is a process that should be done according to the design of your home. Let City Energy design the perfect cooling solution tailored to the size and layout of your living space.

If your home doesn’t have built-in ductwork then buying a ductless air conditioning system is the perfect solution. Ductless AC units are excellent options to cool down additional spaces like your garage, solarium or any add-on space without ducts. Many homeowners opt to add a heat pump to make use of one HVAC system to heat or cool their living space for 365 days of the year.

City Energy is the preferred choice for Home Cooling Solutions

There’s no air conditioning company or service that compares because of our attention to detail and the level of commitment we bring to our clients. We provide every air conditioning service required and are the only HVAC company you will ever need to call again.

We find the perfect size, install and maintain for all major brands of any AC system.

You never have to worry about permits if they are required for your neighbourhood.

We offer same-day and next-day services for emergency repairs to get you up and running.

EXCELLENT Based on 63 reviews.

Ma Mo (Ma Mo)
They are professional , hard working & On-time . They installed 2 HVAC and one AC system for us . I am very happy to work with them .

Hailemariam Saramo
I am really your businesses, I am happy for your work,now I don't worry about summer. Thanks again your service!!!

James Goe
Great service and fair price. The guys did a phenomenal and quick service. They were transparent and informative in the work they were doing. Highly recommend

bahmoon gj
Repair was done fast the Repair my Air conditioning & Furnace in Richmond hill we are very happy with Service thanks guys.

Homa Nikmanesh
Extremely professional and great quality service and completed the job in no time . Thank you and I will recommend you to all my friends and family

DAS
We used City Energy to install a furnace during a renovation. We got quotes from 3 companies and City Energy was the most cost competitive and creative in configuring new ductwork in a tight space. We have used them twice for repairs on another furnace and both times they arrived quickly and carried out the repair professionally without trying to upsell us on a new furnace. Highly recommend.

SAHAR NIKMANESH
Absolutely great experience. He was very honest and took time to explain everything.

kevin niko
Use City Energy for maintenance of all our commercial HVACS. They work with all different makes. They have a great ability at fixing the units instead of trying to force a new unit. Really trust worthy company, I will definitely continue to use them. They always show up on time and on schedule to maintain all of units.

Civic Optical
Great company to work with. Very professional and knowledgeable people. Great at meeting all our needs, work with all different brands of equipment. Very good communication, always explained the work in terms I was able to understand. Always on time, never had to wait for them to show up. Defiantly would use again.

Pouya M
I’m quite happy with their work. They showed up on time and did the job as requested.

Receive our special offers direct to your inbox. 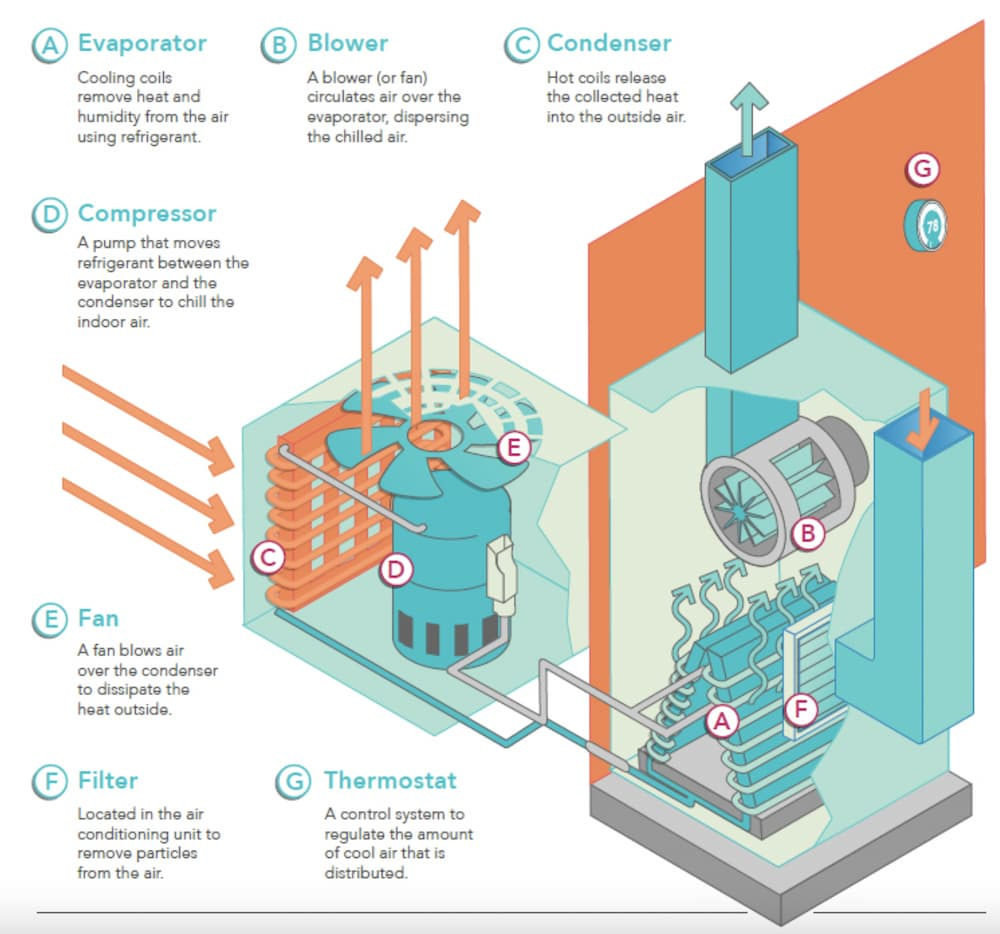 How the process of central air works

The thermostat is normally located in a central room of your home and is a control unit that monitors the temperature of the indoor air. It triggers the system to begin cooling air when it detects the room temperature has risen above the desired level.

Once the signal is sent to begin the cooling process, the fans from the indoor unit begin. This pulls hot air into the evaporator through the air ducts. The air is then filtered for dust, lint, particles, etc. The filtered warm air then passes over a cold evaporator coil.

Heat is absorbed by the refrigerant as it converts into gas. This cools the air as it passes over the coils and is then sent by the blower back into the home through the ductwork.

The refrigerant that was used to cool the indoor air is then pumped to the outside unit. It is forced into condenser coils where a large fan pulls outside air in and the heat is then absorbed and released outside. The refrigerant is converted back into a liquid and sent back to the inside unit to continue the cooling process.

These units operate the exact same as a split system would, by passing air through the evaporator and condenser coils. Rather than have an indoor unit and an outdoor unit, all components are housed in the same unit. Packaged air conditioning systems are used when there is no room for the indoor unit or a rooftop installation is preferred.

A ductless air conditioning system is designed to deliver cool air to specific areas and rooms. Unlike central air systems, a ductless system connects rooms only with tubing, a copper wire and an electrical line. This is usually the choice made for older homes that rely on a water boiler for heat since there are no air ducts.

A ductless system is similar to central air in the sense they operate as a split system. There is an indoor and outdoor unit. The indoor units can be mounted on a wall, put in the flooring or installed as a ceiling cassette. They are not plugged in or installed in windows-they are wired into your home. An HVAC contractor is required to install a ductless air conditioning system.

Have any questions about our home cooling solutions? We have all the answers for you. Our experts understand the requirements from the ground up. Here are a few questions that are frequently asked by our customers.

How much does a central air conditioning system cost?

In Southern Ontario, you could pay anywhere from $3,000-$8,000 depending on a few different variables:

How do I tell which size of AC unit is the right one for my home?

The size of an AC unit is determined by a number of factors such as the size of your home, the age, the airflow, how many windows and doors you have and how insulated your home is. These variables determine the airflow and heat loss and should always be calculated by a professional to avoid complications with your unit and cooling your home.

How often do I change the furnace filter?

You should change the furnace filter at least 4 times a year. Since both heating and cooling systems use the air ducts, keep your furnace filter clean to ensure your air quality remains high. Click here for more suggestions on how to prepare an air conditioner for the summer season.

We offer 24/7 Emergency Service to all of our customers. You can always count on CITY ENERGY Experts to get to you fast and do the job right the first time! We use state-of-the-art diagnostic equipment to find the source of your heating and air conditioning problems and fix them fast.